On this update the focus has been to add the possibility to have different cars with different colors.  As a start I’ve added 2 new cars that have different performance from the original car.

After experimenting a bit with different color options I can to the conclusion that pre-made skins is probably the best solution with the future possibility for users to create their own skins.

I’m very happy with the result so far! While I was at it I also added support for up to 8 local players and did a bunch of tweaks and improvements. 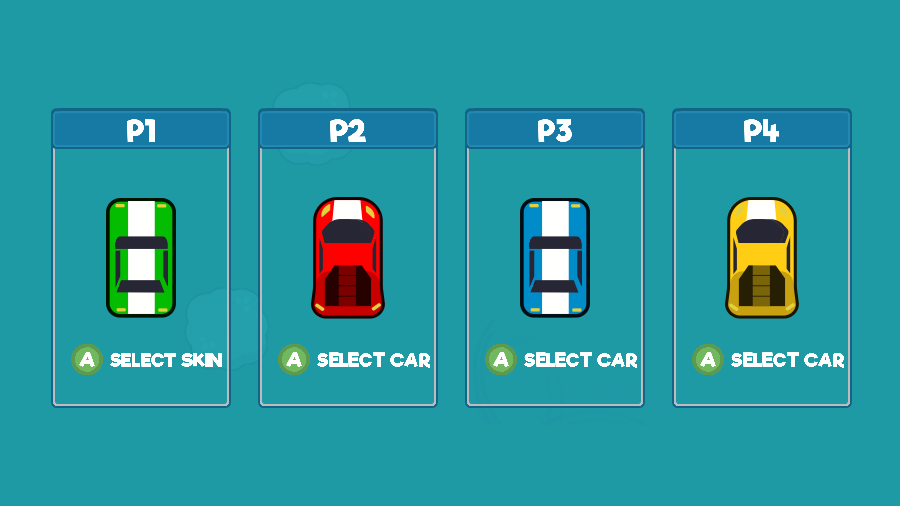 Here is a little video of how the game looks and performs now.

* 2 new cars with different performance, total of 3 cars now 🙂
* New Feature: Ability to select car.
* New Feature: Local multiplayer with up to 8 players!
* New Feature: Skins for cars which changes the colors.
* New Feature: Your position is shown when you complete a lap.
* New Feature: When a car finishes the race a finish flag is show.
* Improved: Text lap was hard to see, changed it and made text bigger and changed color.
* Improved: AI takes over when the player has finished the race.
* Improved: CPU shows their position when they have completed all laps.
* Improved: Add keyboard support for local multiplayer up to 4 players, on the same keyboard :o)
* Fixed bug: Lap UI should be using one less lap as it now says 8/8 just as the player completest the final lap.
* Fixed Bug: Lap completed sound effect is played even when a player has completed all laps.
* Fixed Bug: Lap counter was not showing the best player when running in local multiplayer.
* Fixed bug: Player cars drives by themselves for a short time when a race starts