Oops I did it again … several updates and no devlog…

I’ve been making steady progress on Total Arcade Racing but most things have taken way longer than I expected. This has been frustrating for me personally as I would have gotten further in the project by now.

What would an racing arcade game be without jumps, pretty boring right? This is one of the things that I mentioned earlier which took waaaay more time than expected. I’m pretty happy with the end result and it’s just plain 2D with scaling and some other magic tricks with collisions etc.

To be able to build more interesting and complex levels I needed to add support for bridges and underpasses. When you are driving under something like a bridge an outline is displayed.

The car stats was hidden in the game before but one of the most common requests was to show them to user.

The old country selection was a pretty bad experience and with loads of more countries left to add it was just going to get worse. The solution was to use a more traditional picker that will be easy to expand with more flags.

I re-did the graphics on all cars and remove the complete flat design. I think it looks nice even though you mostly see this difference when picking cars. The old design is above and the new cars are below. I also added 2 new cars. 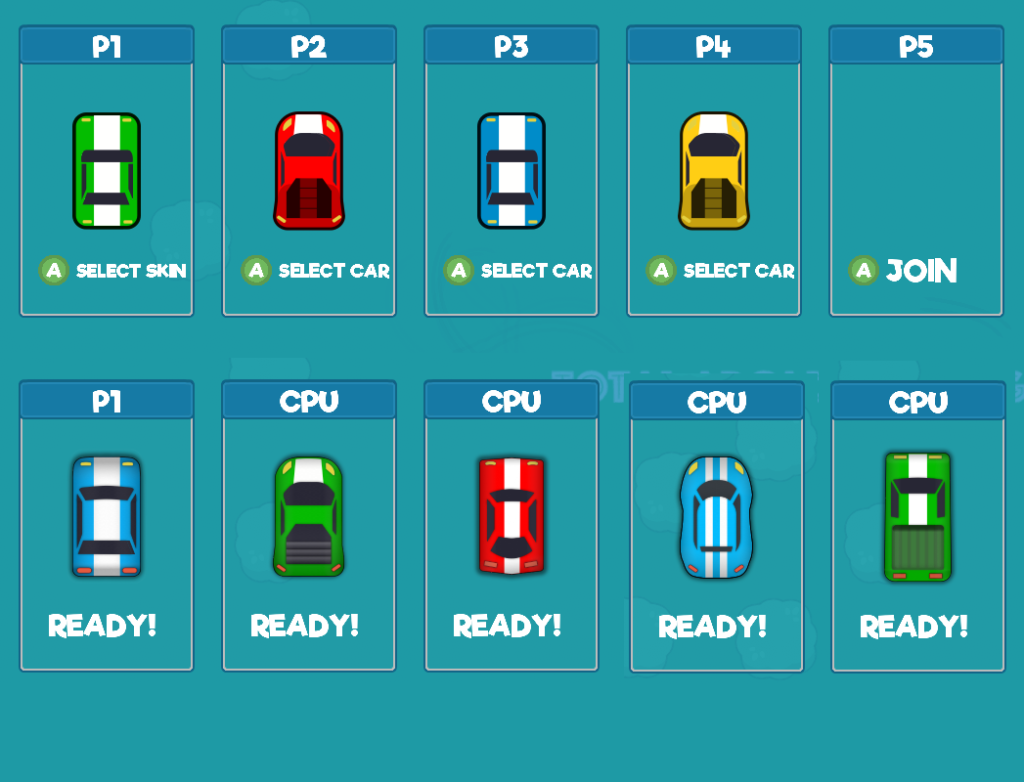 A bunch of other things have been improve here and there.

* When playing single player all keyboard setups can be used by P1. This means that you can drive with arrow keys or WASD if you wish.
* CPU players in local multiplayer will strive to pick another car than another player.
* Adjusted SFX volumes.
* Made oil spill higher resolution.
* Arrow keys now work for car selection country selection.

* Fixed Bug: While going over a bridge you would still collide with cars going under the bridge.
* Fixed bug: If you play local multiplayer with only 2 human players and the players play as player 1 and 3 the 2nd player doesn’t get spawned.
* Fixed bug: When reversing no sfx is played as engine sounds.

* Added a bit more drag when you hit an obstacle and slide against it. Before it almost didn’t have any impact on reducing speed.
* When reversing the drift of the car was way too high. Reduced it a lot and now you can drive i reverse much better.
* Added more variation to how AI drivers drives.
* New and improved way of selecting country under settings.
* Added more country flags.
* Added graphics for classic start lanes.

* If the host is disconnected from a game, the new host will not be able to complete a lap as the states was not synchronized.

* Improved: Music fades in at game startup instead of blasting at full volume.
* Improved: Added splashscreen.

* Fixed Bug: Player start boost didn’t work some times.
* Fixed Bug: If you have music volume set to zero you will still hear the music for a short while when the game starts.
* Fixed bug: UI Canvas scaling doesn’t work properly on ultra wide screen, the UI is offscreen.
* Fixed bug: You can’t get down to “save” in the settings using only a controller, it gets stuck at the player’s name.

Online multiplayer related:
* Improved: Added player idle detection
* Improved: Host checks if players actually complete laps. If no one is completing laps the host will get kicked and another host will take over.
* Fixed Bug: While waiting for other players and you race then lap counts and if you complete more than 4 laps AI will take over.
* Fixed Bug: The host car orientation was not set properly when a race is starting which caused weird things like the host facing the other cars.